*Bot (pronounced starbot) is a research project on telepresence robots for the general public.  A COMMIT/ valorisation project by Merijn Bruijnes and Robby van Delden investigating the impact of telepresence robots in everyday life. The project investigates the opportunities and the social, ethical, and technical issues that come forward when we start using these `Skype on wheels’-robots in our every-day lives.

Imagine when these telepresence robots become cheap, really cheap. What would you do with it? What opportunities do you see and what kind of problems would you encounter? In the context of the *Bot project we try to find different use cases and investigate the opportunities and challenges with those use cases. The star (this one: *) in *Bot is a placeholder for any use case. For example, if you go shopping with the robot it becomes ShopBot. Below you can read about *Bot’s adventures!

The use case ShopBot was probably the first successful purchase using a telepresence robot… and we got cookies!

We also bought beers with BeerBot. This brought up questions about legislation and identification for using telepresent devices. Could the cashier know my ID was not fake? What if my 15 year old nephew used a recording of my BeerBot interaction to buy himself a beer? Should we have a license plate for telepresent robots so the owner can be tracked?

Taking the issues of identification and societal issues a step further, we lured people into becoming accomplices of theft. The cashier, well informed about the project and her roll at this point,  was distracted by accomplices in order to let the robot pass by unobserved and without paying. Free beer for all! No we’re joking, it was returned. It does raise the point, who is responsible for a theft with a telepresence robot? Is it always the owner of the robot? But what if his robot gets hijacked or drives out of a shop without paying because the connection went bad?

We like to take our telepresence robot with us wherever we go! During several events we drove around with the robot.  The telepresence robot invoked a variety of responses. Some people went out of their way to help, others where not so nice.

In some people the robot triggered robot-rage. We saw attempts to blind the robot, drag it along, block it or even kick it. In all fairness, no robots were harmed and they were likely investigating the robot’s abilities and limitations.

We saw people doing their utmost to help us getting refreshments or helping us getting over obstacles. In these people the robot invoked feelings of care (and joy, look at all the smiles!). Thanks for all the help!

Art and robots mix! During an opening at an “art gallery” we gave people the opportunity to be present via our trusted Doubles at TETEM kunstruimte (art-space). The experience was so positive for the virtual guests and art-space, that they recently started a crowd-funding request for a telepresence robot of their own!

Experimentation by tinkering! Filmed at home, we investigated how it feels to move a telepresence robot around “without” touching any buttons. It works, but braking and reversing feels awkward. To be continued!

We mentioned it before, we take our robot everywhere. So when we were asked to play the role of Little Red Ridinghood, we knew the perfect actor. A small funny clip made during an outing revolving around a telepresence robot variety of Little Red Riding Hood.

Can you referee a football match with a telepresence robot? Let’s find out!

We all know telepresence robots are a way to reduce travelling time. However, what if you want to be at a location where there is no robot yet? Can we simply put our robot in the train and enjoy a free ride? Unfortunately in the Netherlands the main train transportation company does not approve this. Mainly because of safety reasons it is not allowed to let baggage travel without supervision. So, if we want to bring our telepresence robot somewhere with public transportation, you will have to arrange a chaperone for now. Luckily, your telepresence robot is no bicycle so your robot will not need a ticket to get to your destination. 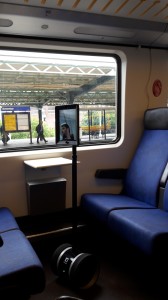